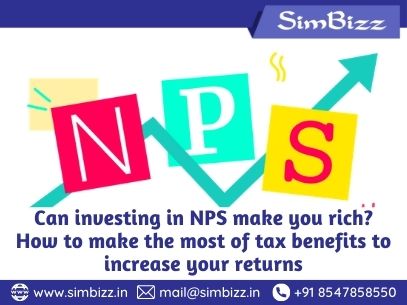 Started investing in NPS about seven years ago when he was employed, to claim tax deductions. Now puts only Rs 50,000 under Sec 80CCD(1b). A 50% allocation to equities has given good returns, so he plans to shift his superannuation fund from previous employer to the NPS.

Jajoo not only put the maximum 10% of his basic salary in NPS but also used the additional Rs 50,000 deduction under Section 80CCD(1b) to cut his tax. He has poured roughly Rs 14 lakh into the NPS since 2015 and saved almost Rs 4.36 lakh in tax.

How much can NPS give you
The additional tax deduction under Sec 80CCD(1b) can push up the overall returns significantly. Kolkata-based finance professional Gopal Kumar Gupta used to invest Rs 1-1.5 lakh in the PPF. But this year he plans to reduce this and direct Rs 50,000 into the NPS. “Contribution to the PPF does not give me a tax deduction because I have already exhausted my Section 80C limit with life insurance policies and ELSS funds. Also, the small savings rates have been declining, so I need to invest elsewhere,” he says.
Gopal Kumar Gupta, 36 years, Kolkata
His life insurance policies and ELSS funds take care of the tax saving limit under Sec 80C. With small savings rates on the decline, he plans to reduce his contribution to PPF and invest in NPS to cut tax.

Is annuity a good option?
Not everybody is convinced that the NPS is a great investment choice. Though his company offers him the NPS benefit, Gurugram-based management consultant Sahil Garg has not opted for it. Garg plans to invest only Rs 50,000 in NPS this year because he feels the NPS requirement to compulsorily invest 40% of the maturity corpus in an annuity is restrictive and would yield suboptimal returns.

Sahil Garg, 27 years, Gurgaon
His company offers the NPS benefit, but he has not opted for it. He is wary of the rule that requires 40% to be compulsorily put in an annuity and plans to restrict his investment to Rs 50,000 for the tax deduction under Sec 80CCD(1b). This is true. The returns from the annuities are as low as 5.8% if you opt for return of principal after death. The option that doesn’t return the principal offers a much higher rate of 7.4%. Since annuity income is fully taxable, the post-tax returns are even lower for investors in the 20-30% tax brackets. It is, therefore, not surprising that investors like Garg find the compulsory annuity clause quite restrictive. At the same time, the annuity should not be a deal breaker. The NPS has seen several changes in rules since it was opened to the public 12 years ago. Annuity rules could also become more investor friendly in future. In fact, the Pension Fund Regulatory and Development Authority (PFRDA) is considering a proposal to allow subscribers to park the 40% meant for annuity with a pension fund manager to get better benefits. Speaking at a recent conference, PFRDA Chairman Supratim Bandyopadhyay said, “A lot of people were complaining about (low annuity rates), so we thought why not give them the choice to retain that 40% with the pension fund manager.” The PFRDA is in talks with pension fund managers and the government on this.

The best NPS funds
Till a few years ago, there was not much difference in the returns of the seven pension fund managers of NPS. But the gap has gradually widened, making the choices quite obvious for new investors. The returns of individual schemes do not reflect the actual returns for the investor because the portfolio is usually a mix of 2-3 different classes of funds. ET Wealth studied the blended returns of four different combinations of the equity, corporate debt and gilt funds.

Stock market rebound boosted returns of equity funds
SIP investors were the biggest gainers as stock markets crashed in early 2020 only to bounce back and hit new highs.

Aggressive investors with 50% in equities have made good gains. But don’t look at the past 6-12 months alone. The long-term returns are a better indicator of what investors earned.

Aggressive investors, who put the maximum 50% in equity funds, have earned the highest returns. The past one-year returns are misleading, so look at their long-term performance. HDFC Pension Fund is the best performer for this allocation. SIP investors have earned even better returns than those who invested lump sum. A balanced approach has yielded handsome rewards for investors. Note that SIP returns in past 3-5 years were higher than what lumpsum investments earned.

Balanced investors who divided the corpus equally across all three fund classes have also earned high returns. Here again, the short-term performance is skewed by the rebound in equity funds. These funds gained from the rise in gilt and bond funds as well as the surge in equities. HDFC Pension Fund is the best performing pension fund manager.

Conservative investors, who put a sliver of their corpus in equity funds, have not done badly either. The bond rally gave good returns while the equity rebound boosted them further. While LIC Pension Fund is the best performing fund in the short term, HDFC Pension Fund stays ahead in the longer term and in the SIP mode.
The past six months have been bad for investors in gilt and corporate bond funds. But in the past 3-5 years, they have earned more than what small savings scheme offer. Ultra-safe investors who stayed away from equities have earned the lowest returns. The past six months have been particularly bad. Even so, their long-term returns are higher than what small savings schemes offer. The LIC Pension Fund is the best performing pension fund for the ultra-safe allocation. Analysts believe the rate cycle has turned and returns of gilt and bond funds will be muted in the coming years.